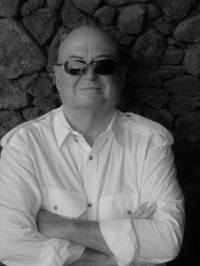 Well-known screenwriter Jurgen Wolff talk on 6/28 had a record attendance! 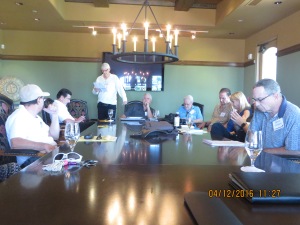 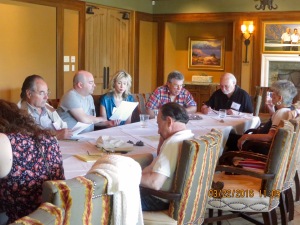 The 3/22 meeting. Members participating in table read of first 10 pages of a Mike Colonna script. 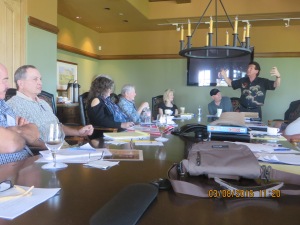 The 3/8 meeting on the topic “Action speaks louder than words. Each character needs his/her voice.” Presenters in middle of the photo are Kristin Johnson, Phillip Vance and John Burns (standing). 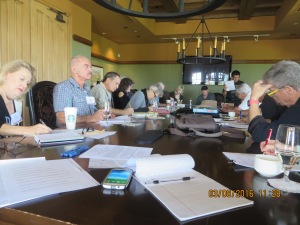 Everyone working on assignment from John Burns in the 3/8 meeting. 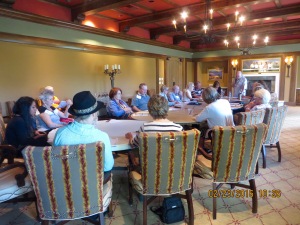 The 2/23/16 meeting was one of our largest yet with people coming from San Diego and LA.

Author and DSG member Kristin Johnson (white dress in center) presents to the DSG 2/9/16 meeting on dialogue. According to member feedback, one of our best meetings. Thanks much Kristin, Janeil and Mike for making this all possible! 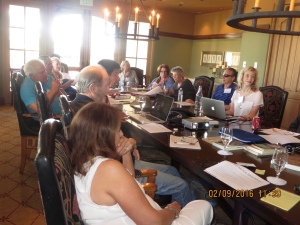 Another photo of the 2/9/17 Kristin Johnson meeting on dialogue.

Mike Colonna makes a point at the 2/9/16 meeting as John Burns looks on.

The DSG starts 2016 with it’s largest meeting in its history! 40 come to hear the fantastic presentation about selling to Hollywood by NYT best-selling author and DSG Creative Advisor Andrew Kaplan.

DSG President Ray Lovato listens to the Kaplan presentation at the 1/16/16 event. 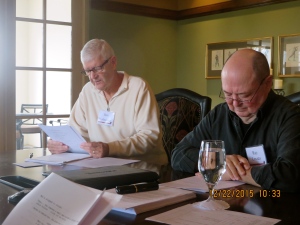 Don Hofmeister and Ray Lovato study a script problem at the 12/22/15 meeting.

PSWG meeting 12/6/15. DSG member Andrew Kaplan (on right) with bestselling author David Morrell. He is best known for his debut 1972 novel First Blood, which would later become the successful Rambo film franchise starring Sylvester Stallone. He has written 28 novels, and his work has been translated into 26 languages.

The 11/10/15 meeting featuring world famous screenwriter Jurgen Wolff in the new meeting room for the DSG … the boardroom of the La Quinta CC. Much thanks to DSG member and La Quinta CC member Mike Colonna for making this happen.

The 10/23/15 Logline Meeting of the DSG: Much great discussion. Andy Harmon (left) of CV Rep Theatre makes a point. Next to him to his left, Mike Colonna, Tom McKeown, John Burns, Dwayne Frechette (hidden) and Dennis Simpson listen. 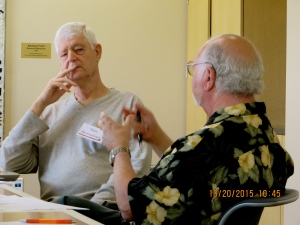 Don Hofmeister gives Andrew Kaplan his traditional skeptical look at the loglines meeting in October 2015. Don has written more screenplays than any member of DSW. 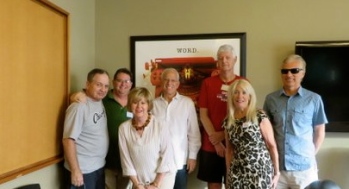